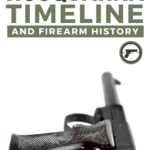 I bet you didn’t know that Husqvarna actually started as a weapons smithing rifle factory in 1620, and continued to manufacture firearms through the 1980s! I sure didn’t despite my love of history, firearms, Husqvarna chainsaws, and fond memories of my mom working on a Husqvarna sewing machine!

Take a look at this long-standing company’s origins and timeline of quality products to learn a bit more about the Husqvarna origin and illustrious Husqvarna firearm history that began in a little town in Sweden and has grown to a worldwide brand name.

430 years ago the Swedish monarchy decreed the founding of the Jönköping Rifle Factory, from which the well-known Husqvarna “gun site” logo was born. In the early years the factory produced approximately 1500 musket pipes annually, and with the growth of the business, in 1689 established a separate site for boring and grinding musket pipes in the nearby town of Husqvarna. The entire area had been known for its talented weaponsmiths dating back to the 1300’s. This raw talent passed down for generations, combined with a long-standing tradition made it the perfect area to develop into a weapon manufacturing site.

This Rifle Factory Era of the company was transferred to private ownership in 1757, upon which it took on the name of the Husqvarna Rifle Factory. The next 100 years saw a growth in manufacturing due to their continued contract with the Swedish crown, and all production moved to the Husqvarna location by 1850.

When the rifle contract ended with the crown, Husqvarna saw a marked decrease in business, and decided they needed to branch out. Growing industrial trades and the need for household items were beginning to grow, and Husqvarna took advantage of newfound technology and needed to manufacture products that could be put to good use in the modern household.

Sewing machines, wood stoves, gas stoves, typewriters, motorcycles, and a wider range of firearms that included hunting weapons began to make their way onto the market through Sweden, Europe, and eventually the rest of the world.

By 1918 they had introduced their first lawnmower, and entered into the growing lawn and yard care industry. By 1919 they were manufacturing their own engines for everything from lawnmowers to motorcycles- and by 1921 was a well known household name. The introduction of electricity into the home also allowed them to slide into the kitchen appliance industry, and it wasn’t long until they offered a dependable range of dishwashers, electric stoves, and even washing machines.

Through the incredible changes and growth the company was experiencing, they never stopped manufacturing weapons and much of their technology was adapted by various other weapons manufacturers, and many of their parts were used in wartime weapons.

Despite their not being a direct weapons supplier during the World Wars, plenty of their firearms and firearm technologies were in the hands of those defending their homes, and their products were depended on during the FInnish Winter War, and also used by Danes and many Swedes. The Swedish M-40 pistol was a popular choice, and is now a highly coveted collectors item.

With the advancing of both World War I and World War II, Husqvarna was called upon to supply bicycles as a means for bike corps to get from one place to another- and the company kept these regiments well supplied. They even produced trailers to tow materials and weapons from one place to the other. The Husqvarna motorcycle quickly replaced the bicycle during the second world war as well.

Following World War II, Husqvarna continued to grow, applying their engineering designs to motorized lawn mowers, chainsaws, brushcutters, and newly invented innovations such as anti-vibration technologies. This, combined with chainsaw chain brakes for safety launched them into the head of an entirely new division of growth, and today their chainsaws are amongst the best in the world.

In 1972, they shortened their name to just Husqvarna to better encompass all they offered, and introduced a sleeker, more modern logo adapted from their original design. This change occurred for more than one reason, however. In 1967 the last rifle made by the company was manufactured, and the company only moved forward with the shotgun hunting option as part of their weapon division. Their constant growth in other areas soon began to overshadow even this, and by this time few people even knew the company spent its first 250 years as a weapon manufacturer!

Bought by the Swedish company Electrolux in 1977, they became a subsidiary of the new company and became more streamlined over the years to focus almost exclusively on forestry and horticultural products.  After perfecting their motorcycle, this division was sold off in 1986 and it continues to thrive with its new owners. Their sewing machine alone also came to an end in the 1980s, and their last shotgun was created and shipped off in 1989.

Husqvarna became an independent company in 2006, and continues to this day to be a worldwide manufacturer and supplier of outdoor power products, lawn mowers, garden tractors, and chainsaws. They continue to apply innovative and new technologies to grow and meet the needs of their consumers.

Long gone are their days of gun production, but without the little town of Husqvarna and a population of excerpt weapons smithing and makers, this successful company never would have made it.

I’ll admit, this was an absolutely new topic to me. My work in forestry was an excellent introduction to the Husqvarna brand, but I never knew their beginnings were deeply rooted in weapons manufacturing. The awesome history of this company influenced firearms throughout Europe, and their specialized parts are still adapted by various weapons makers today.

Despite moving on to new industries and successes, Husqvarna’s origins should not be forgotten in the annals of history and their contribution to the firearm industry is important to remember.

Leave us some comments below and let us know what you knew, or learned, about this popular brand name. And, as always, please share!