Gun Ownership by State in America 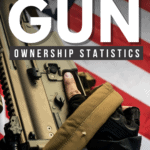 The US Constitutional Amendments are a living document created by American forefathers to protect US citizens from government overreach.  They were made to safeguard freedoms against tyranny, and are not granted by the Government, but considered a God-given right and are not to be infringed upon by any government.

The Second Amendment is often hotly contested since it deals with the right to bear arms, and is often broken down and criticized for not being ‘up to date’ or ‘not applicable’ to modern firearms. However, as a living document, it encompasses the legal right to own and bear guns, and the amount of guns owned by law-abiding US citizens illustrates just how seriously they take this right.

The Legal Right to Bear Arms

One of the many reasons why there are more guns in the United States than there are people, is our Constitution’s 2nd Amendment that reads, “A well regulated Militia, being necessary to the security of a free State, the right of the people to keep and bear Arms, shall not be infringed.”

The wording of this has been contested time and again in various courts, but in 2008, the District of Columbia vs Heller case concluded that “that the Second Amendment right to bear arms vests in individuals, not merely collective militias, while also ruling that the right is not unlimited.” This does not mean that every US citizen can legally carry a firearm, nor does it mean that you can purchase or own any type of firearm, but it does recognize the individual’s right to own and carry legally on a federal level. States are allowed to interpret and conclude at will, as well, and it is the gun owner’s responsibility to know the laws in the state they reside within.

Gun owners overwhelmingly state protection as the reason why they own a firearm. Although many own more than one, only 38% of hunters and 30% of sport shooters claim those are their only reason for gun ownership. Most look to firearms as protection, with hunting and recreation coming in as secondary reasons respectively. Because of this, over 70% of gun owners own a handgun of some sort, with rifles and shotguns making up the rest.

Why Guns Are Good: Criminals and the Armed Citizen

Although a pressing argument by many non-gun owners is that crime increases with every gun sold, this simply isn’t the case. It is estimated that approximately 393 million legal guns are owned in the United States, meaning it’s possible every person owns a gun, possibly two. But the reality is, about 40% of households own a gun, and with approximately 393 million guns out there, that means most households have more than one gun on the property. According to the anti-gun sentiment, this means just about every one of us should be dead in the street, but if you look around, that simply isn’t the case.

This is because the highest amount of crimes committed with a firearm involve the illegal possession of a gun, a theft of a gun, or the unauthorized use or purchase of a gun. This doesn’t mean there aren’t crimes committed with legally owned weapons, but it does mean that bad guys do bad things and have found a way to get a weapon despite strict gun laws.

The ability to legally possess one (or more) of the aforementioned legal guns has actually helped to reduce crime. The passing of conceal and open carry laws has helped reduce violent crimes, and those who are issued permits for concealed carry has shown that those people are 14% less likely to engage in a violent crime. To see a full list of myths and facts, take a gander at these statistics backed by national databases.

Owning and keeping a gun in the home (or business), even if you do not carry, helps reduce the likelihood of being made a target. Even a study done by the Center for Disease Control in 2012 concluded that as many as 3 million violent crimes may be thwarted each year due to gun ownership. The study was published to help identify and improve knowledge surrounding the causes of firearm violence, but the results could not ignore the data gathered that highlighted the positive results of responsible gun ownership.

The Demographics of Gun Ownership

Since it is not a federal law to register a gun, there is no true number of just how many guns are out there. Some states require registration upon purchase, but for the most part, gun ownership, per capita is an estimate based upon overall gun sales and independent polls. This still gives us a good rate of the overall demographic trends of firearm purchases, and provides us some insight into the reasoning behind this ownership as well.

In fact, in 2020 alone, it is estimated that 5 million American’s became first-time gun owners. This definitely changes past demographic polls, and rather drastically in some cases. Because demographic information is not collected upon time of purchase, it may take a few years to have a clear picture of firearm ownership. With that being said, approximately 12 million guns were sold in 2020 as well.

However, past trends in ownership include the following statistics:

As mentioned earlier, these numbers are estimates based on gun sales, and are constantly changing since most guns are not required to be registered. However, they provide a decent picture, per capita, of what gun ownership by state in American looks like.

Various state laws surrounding registration and permits also drive these statistics, since states throughout the South, Midwest, and West have more relaxed laws overall in reference to the steps required for registration and carrying when compared to many Northern states. Plus, these areas are often more rural in nature as 60% of households that own a gun are considered rural.

The top 5 states that currently have the most guns include:

But these are large states, with large populations. Take a look at the following tables that provides a look at legal gun ownership percentages throughout the United States:

Gun ownership in America has a long and illustrious history. Despite the legal challenges the Second Amendment has run across in the last few decades, the Supreme Court has ruled multiple times in favor of individual rights to own legally defined firearms. Despite the individual state’s abilities to create laws surrounding how an individual may purchase, carry, and use their weapon- legally obtained firearm ownership is safe from persecution.

Hopefully, this article has introduced some interesting statistics surrounding gun ownership in the United States and has provided you some insights into the vast number of firearms in existence, how they are used, and who they are owned by. We’d love the chance to answer any questions you may have in the comments below, and, as always, please share!