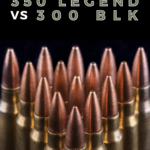 When hunting, you want a dependable round that can drop your target over a wide range of distances. The 300 BLK was designed as a powerful AR platform style option that has caught the eye of most big game hunters, but the introduction of Winchester’s 350 Legend has created some serious competition.

A top choice for hunting, competitive shooting, or even just a range day plinking- both calibers are worth keeping in your arsenal. The Legend is quickly beginning to show some serious advantages, however, and it’s worth understanding the ballistic differences between the 350 Legend vs 300 Blackout.

What’s The Difference Between 350 Legend vs 300 BLK Rounds?

We’re just going to cut to the chase and tell you that the 350 Legend outperforms the 300 BLK on just about every level. This isn’t to say the 300 BLK doesn’t hold its own in plenty of scenarios as it is an awesome round, but the 350 Legend is one of the newest calibers on the market that simply stomps all over its competition. Larger in size, the Legend provides more energy, yet less recoil compared to the Blackout.

Comparison Between 350 Legend and 300 BLK Rounds

A quick ballistic side by side comparison easily highlights the differences between the two. Obviously the 350 is a larger bullet overall, which explains the lower velocity at 200 yards, but it is obviously superior in its overall energy and muzzle performance.

You’d think there wouldn’t be much of a market for new big game cartridges, but recent law changes in some states have opened the door for such an introduction. Some states, especially through the midwest, used to only allow muzzleloading and shotgun slugs, but have eased up concerning rifle caliber ammo. Limited to straight-walled cartridges, a flurry of options have gained attention, and the centerfire, straight-wall 350 Legend Caliber was introduced by Winchester in January of 2019 as a legal option for hunting in various states.

The cartridge is based on the .233 Rem’s rimless case, and these similarities make it a good choice for an AR-15 type rifle with modification for proper operation. There are 5 different 350 load offerings through Winchester, and span from 145 – 265 grain options for different hunting needs.

Compared to a 12-gauge slug, these bullets offer a sleek deer hunting upgrade indeed, and have been gaining ground in popularity for their stand alone ballistic that basically runs roughshod over comparable rounds. The energy output isn’t just good for dropping deer either, they have become a top pick for Southern hog hunters when deadly accuracy needs to count on the first round.

The energy of the Legend 350 isn’t all it has going for it. Its legality makes it a hot commodity for many hunters, and as a newer round on the market, provides new firearms and firearm modifications to shoot it through. The ballistics aren’t designed for half mile shots, they are dialed in for 200 yards or less- which is plenty for the market they were designed for to offer optimal killing power (although their accuracy is pretty spot on for long range targets). Plus, the recoil is a fraction of similar rounds, offering a 8.5 pound recoil on a 7 pound rifle.

There are truly no complaints surrounding the .350, except one- which is not a deal breaker by any means. The issue with this cartridge is the fact that a standard 5.56 x 45 magazine doesn’t work with a 350 Legend unless modified. For deer hunting purposes, you are only allowed 5 rounds anyway, and it’s worth the work for even a 30 round mag when hunting hogs.

Originally created for military use, the 300 BLK Rifle and Pistol configurations are a versatile option for hunting and home defense. First introduced and approved in 2011, this has become a winning round for a wide range of firearm enthusiasts. It is especially popular with hunters due to its range capabilities, and powerful accuracy.

The .300 is a modified from a 5.56 and is another popular AR-type rifle build use, allowing for a large range of reloader and budget conscious platforms. Unlike the .350, these fit well with the AR platform magazines to avoid having to modify or purchase new hardware. This is also a long range shooting option with great trajectory at 500 to 600 yards with the proper gas system- and as a hunting option, is popular in open areas where long range shots are more common.

Despite this, since it was designed for close range combat, it is an excellent choice for incredible energy and stopping power for both deer and hog hunting in close quarters. It also is a choice for home defense that cannot be beat.

This is truly a great all around round, plus, since it has been used for around a decade now, is easy to configure with existing AR-15 platforms. It fits existing mags without modification issues as well, which is the biggest issue with the .350. Plus, it is an accurate, lethal round that has been a hunting favorite for close to a decade. It’s velocity outperforms competitive rounds due to its lighter and smaller size, and what it loses concerning energy, it makes up with its surprisingly decent long range accuracy when built correctly.

There isn’t a whole lot to complain about when it comes to a .300 round. It has been a popular choice for a reason, and offers a decently affordable choice for anyone who reloads as well. If anything, the energy cannot be compared to the .350. Side by side you want the power of a 350 Legend when being charged by an angry boar.

When it comes right down to it, when it comes down to overall effectiveness in doing what it was created to do- the 350 Legend walks all over the 300 Blackout. Even though the 300 BLK is a dependable round and provides accurate power in an easy to load platform, the .350 cannot be beat when it comes to overall energy. With a target between 100 and 200 yards, it is far superior in stopping power and ensures you have the kill shot you need.

Although pricing is comparable, each are offered in various weights for different shooting experiences. The .350 is available in 145 to 265 grain weights to offer the ability to practice cheaply. Plus, the recoil is less across the board. .330 Blk loads general weight between 180 and 220 grains.

These are both great caliber rounds and you definitely cannot go wrong with either one. The biggest advantage the 300 BLK has over the 350 Legend is how easily they fit into existing AR mag, making them more versatile overall. However, given a few more years, and the .350 will be just as competitive as manufacturers catch up to the obvious demand.

Great for hunting, the incredible stopping power of the 350 Legend is perfect for targets between 100 and 200 yards (or shorter), and is a legal option for rifle season in areas that have stricter hunting laws.

If you’ve had a chance to shoot a 350 Legend, we’d love to hear about your experiences below. And, as always, please share!